The Ballad of Ramiro Martinez 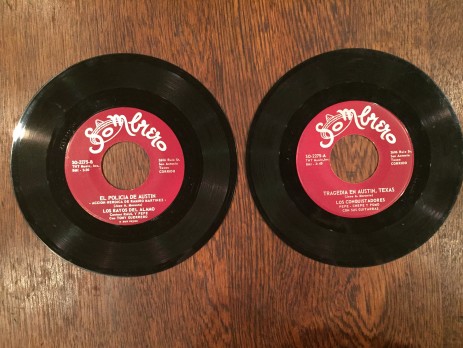 The Ballad of Ramiro Martinez

Likely Ramiro Martinez is no different. So imagine his surprise when, as he strolled an Austin city street two weeks after he risked his life along with fellow police officer Houston McCoy to shoot and kill sniper Charles Whitman, he was struck by a familiar tale set to song. The tune was coming from the jukebox of a nearby bar. And though the events were still fresh and seared into Martinez’s memory, the surprise of hearing those details put to music must have been startling, and perhaps even jarring, to say the least.

The song he was hearing was a corrido, “ballad” in Spanish, and it was entitled “El Policía del Austin: Acción Heroica de Ramiro Martínez.” It was written and produced by Jose Morante, a singer-songwriter out of San Antonio.

The corrido laid out the horrifying details of Martinez’s day atop the UT Tower on Aug. 1, 1966. Of Martinez, it told of his destiny to “kill a criminal” and named him as “a good policeman” and “one who lived according to the law.”

The song’s existence and broadcast mere weeks after the tragedy speaks to the powerful, immediate, and lasting impact the shootings had, not only on the Austin community, but throughout Texas as well. Furthermore, that Martinez’s heroic actions were commemorated in song demonstrates the love and the tremendous respect that same community, the people of Austin, and indeed all Texans, felt for him in the aftermath of a terrible tragedy.